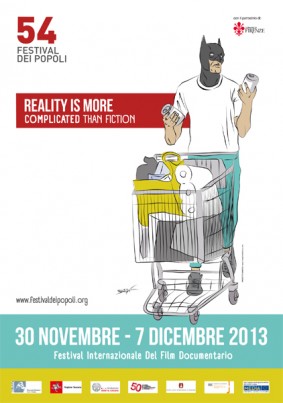 BEST FEATURE-LENGTH DOCUMENTARY AWARD
Per Ulisse (Italy/France, 2013)
by Giovanni Cioni
With the metaphorical frame of a cathartic journey, this film is truly of the people, made with people, and not just about people. Transforming indelible moments of story-telling and play-acting into eccentric cinema, the filmmaker restores us to the deep feeling of listening, of being open and responding with our own bodies to the experiences, fragilities, insanities, joys, and inherent beauty of other human beings.

SPECIAL MENTION
Costa da Morte (Spain, 2013)
by Lois Patiño
Every frame appears as a synthesis of formal elements, transforming the vastness of the landscape into a subjective experience, into an hypnotic state discovered when we spent a long time looking, just looking, at the constant movement of nature.

BEST MID-LENGTH FILM
A’ IUCATA (Switzerland, 2013)
by Michele Pennetta
In celebrating the interrelation between brutality and sensuality, the filmmaker explores the tension between the body and the representation of a community.

BEST DOCUMENTARY SHORT AWARD
Cha Fang (China, 2013)
by Zu Rikun
An experimental cinematographic form that is born out of the urgency to document and denounce. With a deep engagement with his own present and inspired by his own body as a citizen, the filmmaker constructs a documentary performance that reveals itself as an act of resistance.

"GIAN PAOLO PAOLI" AWARD FOR BEST ETHNO-ANTHROPOLOGICAL FILM
Buenos Dias Resistencia (Spain, 2013)
by Adrián Orr
The filmmaker camps out in his friend's house to make an intimate observation that amplifies little moments into a compelling story of family relations and staged interruptions. Even though “ethnography” may not be the film’s original goal, its combination of fiction and documentary provides us with an evocative “thick description” that surpasses so-called “ethnographic film” and shares with us a lucid poem filmed with generosity.

Per Ulisse (Italy/France, 2013)
by Giovanni Cioni
For a poetic and delicate re-interpretation of Ulysses'epic, staging the difficult inner journey of wandering souls at the margins of our society.

SUF AWARD to the BEST SHORT FILM
Lewa Polowa Twarzy/Left Side of the Face (Poland, 2013)
by Marcin Bortkiewicz
For its excellent camerawork and montage and in support of a highly original photographic project which illuminates issues of time, ageing, and loneliness through a variety of individual accounts.

SPECIAL MENTION
La Parka (Mexico, 2013)
by Gabriel Serra
The film illustrates with empathy and sensitivity the hard life of a Mexican worker, displaced in both his alienating job and in his family.

SPECIAL MENTION
Quand passe le train (Spain, 2013)
by Jérémie Reichenbach
The film represents as it best the essence of documentary cinema thanks to its unique subject matter and a personal style.